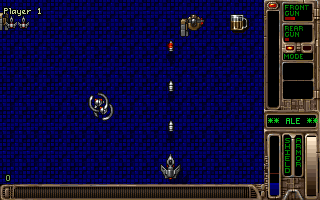 Zinglon's Ale is a minigame from Tyrian. It is accessible at the end of the first episode, after clearing Assassin.

This is Rob Neither with the daily news.

Zinglon's Ale has been stolen!

The Grand Moolah Yimbo revealed today that all of their god, Zinglon's, holy ale has been abducted. Millions of thirsty worshipers fled in panic when the news hit.

"I nearly fainted when I heard the news. How can we continue to believe in a just universe and freedom to eat crackers if we have no ale? I don't know yet what I'm going to do."

This is certainly a crisis of grand proportions. All other work has stopped.

The Grand Moolah has told us that someone must retrieve the ale from the clutches of Dai-Zan, the god of deceit and bad form. Who will save us from this torment?

My Zinglon, I need a drink!

In this game, you must dodge wave after wave of bouncing enemies in an attempt to gather as much ale as possible. While good dodging is important, you must also clear the screen of enemies completely before you will progress to the next level. The game continues infinitely, though it will keep getting harder and harder.

This simplistic game can be deceptively difficult. Don't allow yourself to be hypnotized by the endless streams of enemies!

A quick wave of ships all attack you at once. Grab the ale and blast them quickly.

This is mostly a large group of mines which will attack you slowly. Be sure to avoid the Zeeblex at all costs - it's indestructible!

Two sets of Ignatz will attack you. However, you will pick up two ale bottles here.

Two sets of Williams attack, one right after another. Take them out and grab both bottles of ale.

Ale galore! Watch out for the Zeeblex, though.

Find out for yourself! Note that this is an endless game here for your amusement only.

There are no special moves available in this game.