Edit
watch 01:36
We're Getting Mutants in the MCU - The Loop
Do you like this video?
Play Sound

Forests and Canyons, as well as the many floating rocks

Not many yet due to the recent terraformation

What little is there isn't really for humans

Tyrian is the planet which gives it's name to the game.

Tyrian is the most recent acquisition of Microsol; the sector's largest corporation. Since no single company can own a planet due to Article 17 of the Interplanetary Council Law, Microsol is responsible for the terraformation and trading agreements. Still, Microsol plans to bend Article 17. It's up to you to stop them.

Tyrian is a world under terraformation, which means Microsol hires work teams in the hundreds of thousands to monitor gravity control, land sculpturing, and atmospheric maintenance. Your job has always been to make laser measurements of surface features by flying over them at high speeds in a land skimmer at altitudes as low as ten feet. Other team members handle atmosphere processors, robotic construction crews, even huge horticultural seed ships to plant entire forests in a fraction of the time. Flying over Tyrian, one will notice some rather odd regions. Floating rock formations due to gravity testing, large forests and rocky crags with occasional research facilities dot the landscape. 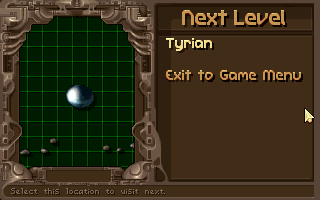 Though only recently habitable, Tyrian features some capable cooking. There is little outstanding about most of the establishments, unfortunately. The Terrace de Rock is a lovely dining hall in the city of Rockenheimer where mineral creatures can dine to their delight on tasty quartz and feldspar dishes. For our reptilian cousins, there is a fine selection of delicacies tuned to the discriminating grubbite. No finer mealworms can be found this side of the galaxy.

Sadly, there is only one dining establishment for humans: another chain in the Interstellar House of Gruel. This one is even more miserable than the one located in the toejam of Torm. Avoid at all costs and try the mealworms instead.

There is only a rudimentary culture on Tyrian, but it does boast a fair number of lovely recreation camps for younger kids. Rockland is a fine example of these joyous facilities. For only 2400 Cs you can send your unloved one away to slave in the beautiful quartz and feldspar mines, where they will learn all about geological instabilities, gaseous substances, forced marches, and especially large-scale mountain sculpture. It's an experience no kid would ever forget!

Mineralists will also be able to gaze in wonder at the incredibly varied geology of the surface strata. Worth a look.

Most visitors come to Tyrian to watch the beautiful floating rocks. Every two months Microsol features a new upheaval where you can see these giant rocks literally rip themselves out of the surface. One note of caution, though. Unfortunately, this is extremely dangerous and they don't know in advance exactly which rocks will fly off. But, for a small fee, they will arrange hospital pickup and quick to-go funeral services.