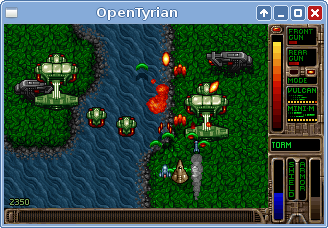 OpenTyrian is a open-source project to port Tyrian to modern systems, licensed under the GNU General Public License. Jason Emery generously gave the OpenTyrian developers a copy of the Tyrian 2.1 source code, which has since been ported from Turbo Pascal to C. The port uses SDL, making it easily cross-platform.

Due to using the 2.1 version of the game, the project doesn't include the additions from Tyrian 2000. A fork of the project, titled OpenTyrian2000, was created as a result, using Tyrian 2000 as a base and thus including all the extra content.