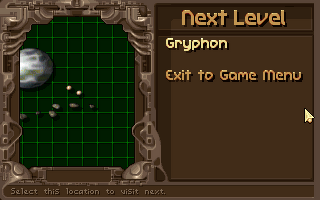 The Gryphon Station is a important area from Tyrian.

Gryphon Sector is the main secret weapons research center for Microsol. It was long rumored to be an ordinary military station, but since the Not-so-Great Gryphon Explosion, Microsol has decided to let it remain in public knowledge. In fact, once a year, they invite members of competing industries to the Station to view how far behind they are in comparison to Microsol.

Still, the station has had it's share of hardships. Many pirates of both the Mikal and Patrok clans have long looked upon it as the pinnacle of their career if they can infiltrate the station's defenses and land a raiding party within the research section, then return with something from their weapons labs. Most never even make it to the station, destroyed by the dreaded Pong Ships.

One retired pirate of the Patrok clan, one ShipMaster Carlos, wrote a book detailing highlights of his extensive career. One of which was the infiltration and removal of a weapon now commonly referred to as the Zica Laser Cannon. He is believed to have been assassinated the next day, but they were too late to stop Gencore from transmitting his book over Fluxnet. In addition, his ship was never found, though it is believed to have been equipped with the Zica Laser. Two months later, Gencore finished development of a device also called the Zica Laser.

Station Gryphon has recently been the main output of Microsol's advanced weapon design program. They have released a number of high powered weapon systems, including several advancements on their Pulse Cannon systems, and their unique Starburst defense field.

After the Not-so-Great Gryphon Explosion, some aspects of their research were turned over to public scrutiny, believed to be because of investigations by families and friends of the twelve thousand crew members that died. It is now rumored that they have just developed a new field of weapons technology which will allow them to build much bigger weapons onto conventional battle cruisers.